When a person has diabetes, their body has a difficult time processing sugars (which includes carbohydrates of all types) effectively. The pancreas in the diabetic person has a difficult time producing the right amount of insulin, the hormone which helps regulate your blood sugar by moving glucose from the blood into your body’s cells. When this process is disrupted, we classify the problem as diabetes. There are two main types:

In this type of diabetes a person becomes insulin resistant. Becoming resistant to the effects of insulin, the cells don’t do what they’re supposed to do anymore and glucose stays in the bloodstream. This type of diabetes is often called, “Adult Onset Diabetes” and is most common in those who are obese because fat cells displace insulin-receptor cells.

What Do We Know About Diabetes & HGH?

But could HGH play an important role in helping diabetics stabilize blood sugar? Research is showing that it just may.

HGH deficiency can lead to hypoglycemia—low blood sugar. But too much HGH—levels of HGH that are dangerously high found in those who abuse HGH injections for body building or sports performance—notoriously has been connecte to Type 2 diabetes. But, does HGH cause diabetes? There’s no research that supports this theory aside from the aforementioned connection between the abuse of HGH injections and Type 2 diabetes.

In fact, research shows that balanced HGH levels may play a role in helping insulin sensitivity and in improving blood sugar levels.

Could HGH Play a Role in Helping People With Diabetes?

A decrease in HGH levels in adults contributes to the signs and symptoms of aging. But, groundbreaking clinical studies show that restoring HGH may actually improve certain health conditions including Type 2 diabetes.

Large doses of HGH given via injection may initially lead to insulin resistance and higher blood glucose levels. But, studies administered by Swedish endocrinologys, Dr. Bengtsson and a Dr. Rudman show that after six months of HGH therapy, a patient’s insulin sensitivity will return to pre-therapy levels. But, this return may be because of changes in body composition inspired by HGH –such as a decrease in fat cells and an increase in muscle mass. The researchers concluded that HGH did not increase blood glucose levels or make a patient diabetic.

A Johns Hopkins study also found that elderly people with low HGH (often connected to extra intra-abdominal fat) and higher blood sugar can have a positive response in their blood sugar levels when given correct amounts of HGH therapy.

Another doctor, hormone replacement specialist, Dr. Thierry Hertoghe believes that HGH can help promote the action of insulin and that because HGH directs insulin to put glucose into muscle, cardiac, and nerve cells instead of fat cells—HGH may improve diabetes.

The key to all of this may be a powerful growth factor hormone called IGF-1.

Insulin-like growth factor 1 or IGF-1 for short, is a hormone with properties similar to insulin. It has been demonstrated to improve blood sugar profiles in people with type 2 diabetes. Some studies have found that the administration of IGF-1 can normalize insulin resistance. For example, a study done at the Nemours Children’s Clinic in Jacksonville, looked at how IGF-1 impacts protein metabolism. Researchers Nelly Mauras and Bernard Beaufrere studied the effects of IGF-1 on a number of different body systems, including IGF-1’s ability to stop the protein-wasting caused by steroids such as prednisone. They also looked at the effect of IGF-1 on insulin and glucose metabolism. In their study, they created three control groups of volunteers. One received IGF-1 alone, one received IGF-1 and prednisone, and one received prednisone alone.

They concluded that, when given two times per day, IGF-1 at 100 mcg per kilogram of body weight could enhance the body’s protein metabolism in a similar way to HGH. IGF-1 also markedly decreased the protein breakdown in volunteers who were taking prednisone, but IGF-1 did not cause the diabetes-like effects of carbohydrate intolerance and insulin resistance as HGH had done in combination with the prednisone in an earlier study. Instead, test subjects displayed normal glucose metabolism. These results were remarkable because glucocorticoids like prednisone are known to decrease insulin sensitivity and suppress circulating insulin in the body.

Understanding, of course, that IGF-1 is not the same as insulin, it can work on many of the same cells as insulin, influencing the sensitivity of the cells to insulin and affecting the whole body. If cells can’t accept or circulate incoming glucose, this hat leads to excessively high blood sugar levels, which leads to diabetes.

According to recent studies, IGF-1 may hold great promise for treatment in diabetic patients. In 1997, two double blind clinical studies demonstrated that recombinant IGF-1 injections can reduce the need for insulin in diabetic patients who are insulin-dependent by up to 45 percent. Included in the study were adults aged 24 to 49 and children aged of 8 to 17. Test subjects witnessed a dramatic drop in their insulin requirements during this short-term trial, with no other serious side effects, which makes it likely that IGF-1 offers great promise and potential in the treatment of diabetes. 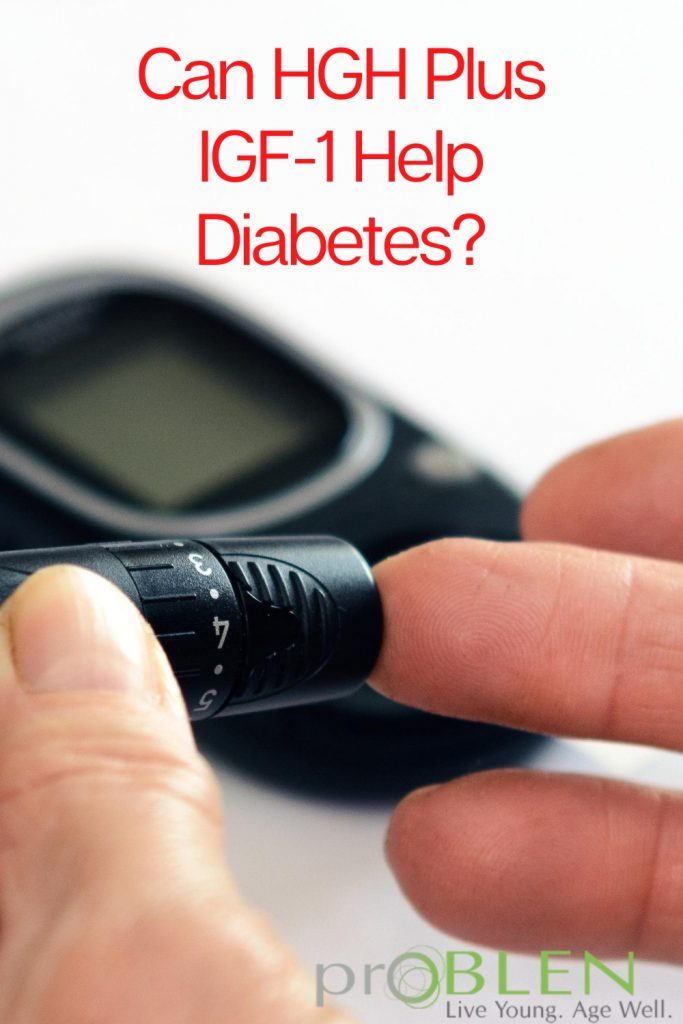